Often called the most accomplished mathematician of the Middle Ages, Leonardo Fibonacci is best known for his “numbers”. It is a sequence starting with 0 and 1, after which every third number is the sum of the previous two numbers. A Fibonacci “sequence” is 0,1,1,2,3,5,8, etc. The Fibonacci “ratios” are 23.6%, 38.2%, 50%, 61.8%, and 100%. These ratios show the mathematical relationship between the number sequences and are important to traders.

These ratios form the basis for critical points in the market and allow investors to forecast buying or selling opportunities once they identify the ratio sequence. Traders use Fibonacci ratios to predict the next high or low for a market or stock as seen in this Fibonacci fan chart of Google (GOOG) below. 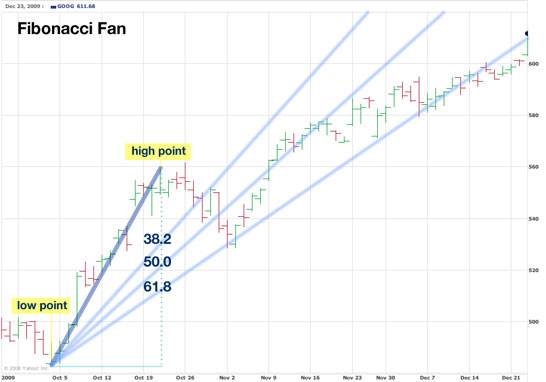 In the chart above, the Fibonacci retracements for Google are shown from its recent low in early October to the most recent high. Using Fibonacci ratios, traders could see where Google might correct to and as you can see, Google followed the 61.8% retracement level almost exactly! This is not a one-time occurance or freak of nature phenomenon. This happens over and over again. And also notice that this 61.8% retracement level acted as a Support level since that time providing traders “in-the-know” exactly how low Google would fall before going up again!

Fibonacci ratios are one of the most powerful and easiest trading tools in your investor’s toolbox. It provides excellent guidance for when a trend will end and reverse course. However, like any good trading tool, don’t use it alone to make your trading decisions. Use it to support your fundamental observations and other technical indicators.