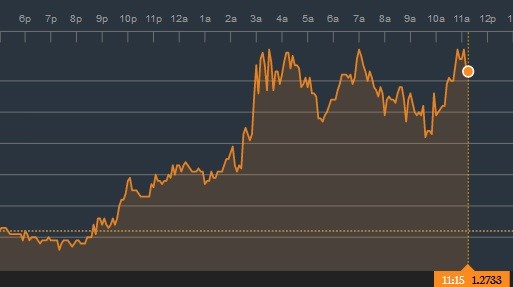 CFD Trading expert, Montgomery P. Bellwether noted that significant call options on the GBP/USD pair were recorded towards the close of the week. Brexit secretary, David Davis, has been locked in intense discussions with his EU counterparts on a wide range of issues. These include immigration -related concerns, trade, finance, political and economic frameworks etcetera. The negotiations will continue for a prolonged period of time. UK and EU delegates will be shuttling between Brussels and London to hammer out the most comprehensive extrication agreement possible.

By Friday, 23 June, prospects were looking up for the GBP. Prime Minister Theresa May, fresh off a disappointing general election, is determined to shore up support in her negotiating prowess with EU negotiators. The Prime Minister attempted to assuage fears about the rights of European Union citizens and permanent residents in the UK. According to her statement, ‘The UKs position represents a fair and serious offer, and one aimed at giving as much certainty as possible to citizens who have settled in the UK, building careers and lives and contributing so much to our society.’ However, the tepid response from EU officials has not offered much in the form of reciprocity to UK nationals in the EU.

In fact, European leaders, notably Jean-Claude Juncker of the EC responded with little enthusiasm, saying that the Prime Minister’s words were insufficient. The president of the European Council, Donald Tusk quipped that the Prime Minister’s sentiment fell short of expectations. Regardless, Prime Minister Theresa May’s outreach helps to stabilise the GBP heading into the weekend, helping it to rise towards 1.2737 by the end of the UK trading session.

The British Prime Minister was quick to quell fears about European families being split up in the wake of a Brexit. The Prime Minister defended the rights of EU nationals currently living in the UK, and added that anyone with 5 years of residence in the United Kingdom would continue to enjoy a host of benefits including health care, education and other special privileges. EU citizens currently in the UK would be allowed to remain for up to 5 years, after which time they would have to leave. In all cases, a grace period will be allowed to smooth out the Brexit process.

The cable is primarily influenced by the decisions taken by the Federal reserve bank, the Bank of England and geopolitical uncertainty. The Fed recently hiked the federal funds rate by 25-basis points, raising it to 1.00% – 1.25%. However, the impact of that rate hike had already been priced into the GBP/USD pair well ahead of time. What is more important to currency traders is the sentiment expressed by various Fed presidents on the state of the US economy and likely GDP growth. From the UK perspective, EU reaction to Prime Minister Theresa May’s outreach and the rights of EU citizens will weigh heavily on the strength of the GBP.

Serious doubts remain however. The Dutch Prime Minister, the Belgian Prime Minister and leaders of high-ranking European organisations are concerned that the nebulous UK policy does not protect the rights of EU citizens in any way. On Monday, 26 June 2017, the UK will release a position paper detailing exactly how it plans to deal with this contentious issue. Currency traders will be carefully eyeing the EU reaction to this important document.